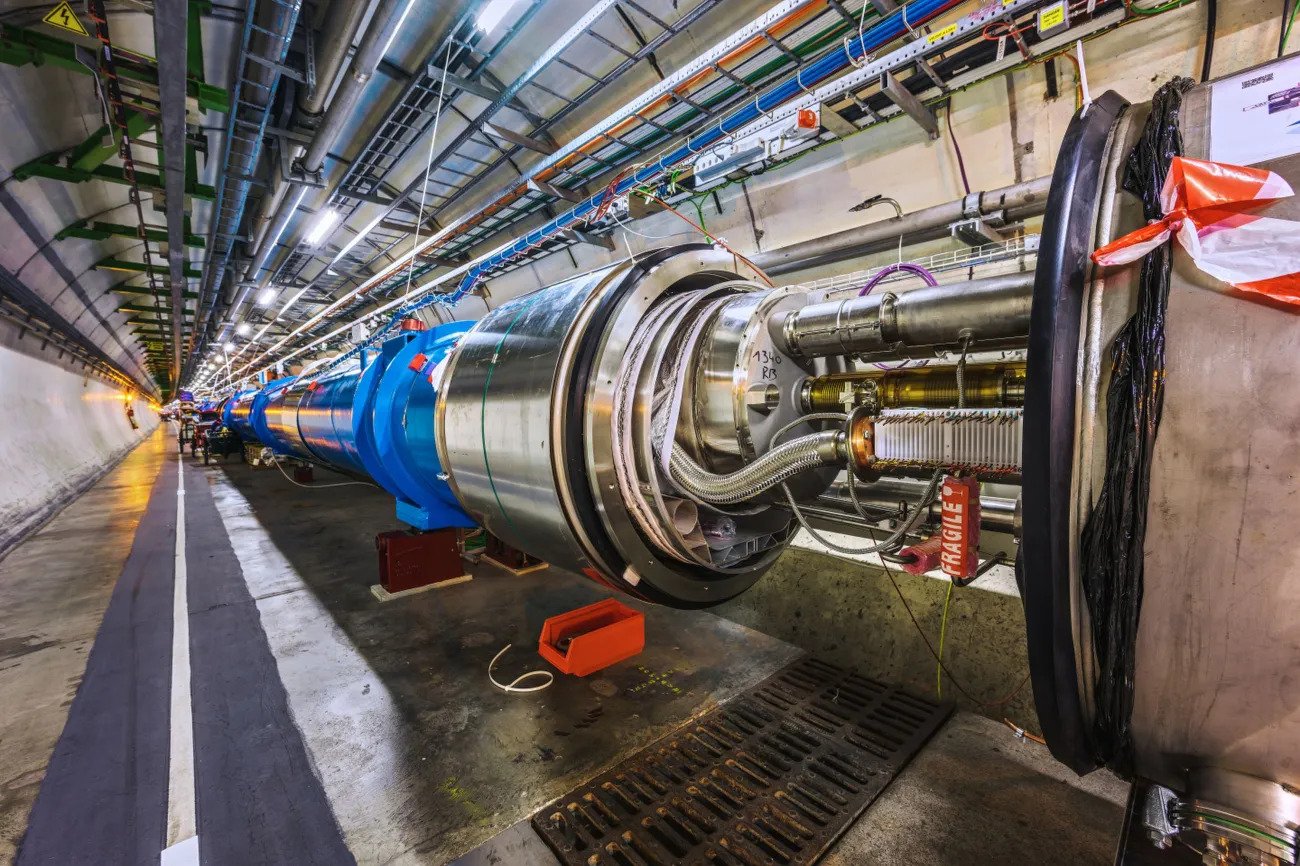 The Large Hadron Collider in Geneva, Switzerland, is the world’s largest and most powerful particle accelerator, developed and managed by the European Organization for Nuclear Research . The collider became operational in 2008 and has since led to numerous landmark discoveries. On Tuesday, July 5, 2022, the third phase of experiments using the collider began after over three years of work to upgrade the system, and scientists hope new revelations will help unlock the secrets of dark matter and other unanswered scientific questions. Samuel Joseph, CERN

Dark matter, making up about 80% of the universe, remains a mystery to scientists — the Hadron Collider could change that.

The world’s largest and most powerful particle accelerator was fired up Tuesday for the first time since completing a 31⁄2-year pause for upgrades, and scientists say the advancements will lead to a trove of new information and insight about the smallest building blocks of the world around us.

And this time around, the nearly 17-mile circle of superconducting magnets that make up the Large Hadron Collider, built 328 feet underground at a site near Geneva, Switzerland, and operated by the European Organization for Nuclear Research, could help unlock some of the secrets to the elusive material that occupies some 80% of the universe but about which very little is known — dark matter.

What the heck is a collider? On Tuesday, the Large Hadron Collider began its third testing “run” since going into operation in 2008. The device uses a series of very powerful magnets to accelerate beams of particles to very near the speed of light before causing the beams to collide with each other or a stationery target.

The process reproduces conditions that existed within a billionth of a second of the Big Bang, according to Space.com. The colossal accelerator allows scientists to collide high-energy subatomic particles in a controlled environment and observe the interactions. One of the most significant breakthroughs for the collider came in 2012 with the discovery of the Higgs boson, a fundamental particle associated with the Higgs field, a phenomena that gives mass to other fundamental particles such as electrons and quarks.

University of Utah physics professor Pearl Sandick said the discovery was a game-changing moment for the field.

“The discovery of the Higgs boson in 2012 began a new era for particle physics,” Sandick said. “It’s unlike any particle that had previously been observed, and we still have a lot to learn about its properties and how it and any other new elementary particles are related to the known particles of the Standard Model.”

And, the Higgs boson discovery itself is informing fresh ideas about the nature of dark matter and guiding the new round of testing at the Large Hadron Collider in a way that could lead to significant new revelations.

What we don’t know about dark matter is a lot. It’s an astounding fact that the vast majority of matter in the universe is actually invisible to us, per Space.com. Astronomers think that dark matter must be present because they see its gravitational fingerprints. Dark matter is the invisible cosmic scaffold that holds together galaxies and galaxy clusters. We just don’t know what it is.

Sandick notes the nature of dark matter remains one of the most compelling scientific mysteries.

“The identity of dark matter is viewed as one of the most important outstanding questions in modern physics,” Sandick said. “If dark matter is a new type of particle (or particles), that would give us incredible insight about the nature of physics beyond the Standard Model.

“But by virtue of its ‘darkness,’ dark matter is very hard to detect. It rarely interacts with the Standard Model particles, making it challenging to discern its presence in a particle detector.”

Intriguingly, Space.com reports, experiments on the smallest scales at the Large Hadron Collider could hold the key to figuring out one of the largest-scale cosmological mysteries of all.

“Since the discovery of the Higgs boson, the field of dark matter has changed completely,” Gian Giudice, who leads the theoretical division at CERN, told a press conference at the end of June.

Ten years ago, the lead contender for the identity of dark matter was a class of particles known as weakly interacting massive particles, or WIMPS for short, according to reporting by Space.com. These would be particles with large masses — hence dark matter’s strong gravitational pull — but which otherwise would only weakly interact, or ‘couple,’ with other particles.

“The experimental data from the LHC has since changed things,” added Giudice. “Our new theoretical ideas have widened our horizons.”

A massive, collaborative effort to engage in science for peace. The European Organization for Nuclear Research, still known by its original French acronym, CERN, was formed by 12 European nations still rebuilding and recovering from the impacts of WWII in the early 1950s.

CERN has since grown to 23 countries and some 12,000 scientists who operate under principles established by its founders some 70 years ago as an organization that “shall have no concern with work for military requirements and the results of its experimental and theoretical work shall be published or otherwise made generally available.”

CERN built its first accelerator in 1957 and by 1971, the science had advanced to include particle collisions.

In just the first day of operations of the Large Hadron Collider’s “Run 3” experiments led to the discovery of three new “exotic” particles that could provide further insight into the forces that hold subatomic particles together, according to a CERN report.

CERN says the organization’s work will continue to focus on “advancing the boundaries of human knowledge by delving into the smallest building blocks of our universe.”