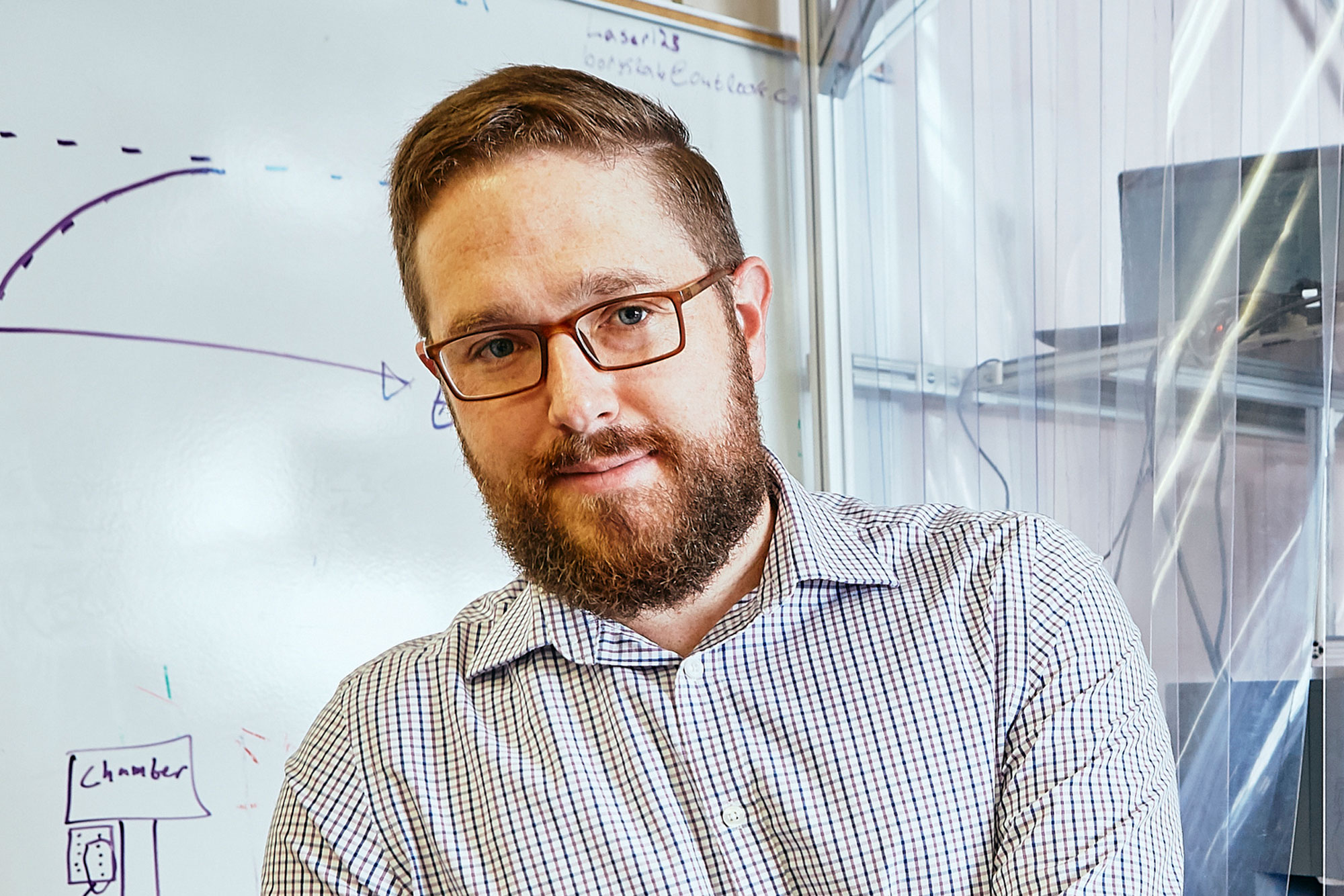 Nick Borys, who received his Ph.D. in Physics from the U, is now Assistant Professor of Physics at Montana State University (MSU) in Bozeman, Montana. He has had an interesting journey from receiving an undergraduate degree in mathematics and computer science at the Colorado School of Mines to leading an experimental condensed matter physics and materials science research group at MSU. The Borys Lab researches materials that consist of two-dimensional sheets of atoms and their potential applications in quantum technologies that use the quantum properties of light for sensing, secure communication, and computing.

In the lab, Borys and his team perform investigations by studying how new material systems interact with light on very small length scales, very fast time scales, and ultra-cold temperatures. In addition to his research group, he co-led the team that established the MonArk NSF Quantum Foundry at MSU. Borys is presently a co-associate director of MonArk and runs its day-to-day operations at the university. MonArk is a multi-institute, multi-state team focused on developing and researching 2-D materials for quantum technologies as well as innovating new technologies to accelerate the pace of research on 2-D materials. Borys is also the instructor for an upper-division quantum mechanics course in the Department of Physics at MSU.

He was raised in the Rocky Mountain Front Range in Colorado and considers Longmont and the surrounding rural farming area his original home, because that’s where he attended middle school and high school.

Throughout his later school years, he developed a strong interest in computer-based technologies. He taught himself several programming languages, became proficient in many different operating systems, and of course, learned how to build his own systems. While studying at the Colorado School of Mines, he was certain that he wanted to be a software engineer and computer scientist, and he received a bachelor of science degree in 2004.

“By my junior year, I was moonlighting as a full-time software engineer in the evenings while pursuing my undergraduate degree in the daytime,” said Borys. “Looking back, I’m not sure how I managed both.”

During his undergraduate education, two pivotal experiences ultimately directed his interest to physics. He was working on a construction team, remodeling office space for a local software company. While installing rubber molding one day, the CEO of the company stopped by, and he and Borys began talking about computers and software. The CEO was delighted that Borys had taught himself programming languages, and he hired him on the spot as a part-time software engineer. Over a year, the part-time job transitioned to full-time, and the first company was purchased by another.

But fate intervened when he took several courses in the Department of Physics just before graduation. Thanks to inspired teachers, he fell head-over-heels in love with quantum mechanics. “Unfortunately, it was too late to change my major, and I had to settle for just taking a few additional physics classes that allowed me to deepen my passion,” he said.

After graduation, he accepted a new position at Boeing to develop software for the military, but realized within six months that he missed thinking about physics. One day while talking with a colleague who was working on an interesting problem, Borys asked how he could get involved with such projects, and the colleague he told him to get a Ph.D., preferably in computer science or physics. At that point, Borys decided to attend graduate school and pursue a Ph.D. in physics.

The U and favorite professors

He wanted to study at the University of Utah first and foremost because of the program and the research. “I knew that I wanted to perform experimental work, and I remember being excited by the research efforts of Professor Jordan Gerton and Distinguished Professor Valy Vardeny,” he said. In addition to the research program, he was also enamored with Salt Lake City and the Wasatch mountains. Growing up in Colorado, he had a love for mountaineering and had just started rock climbing.  So, the University of Utah and Salt Lake City were an excellent fit.

He has fond memories of his classes with Professor Oleg Starykh, Professor Mikhail Raikh, Distinguished Professor Alexei Efros, Professor Eugene Mishchenko, and Werner Gellerman, Adjunct Professor of Ophthalmology & Visual Science. He also loved his conversations with Christoph Boehme, Professor and Chair of the Department of Physics & Astronomy, as well as Jordan Gerton. “All of these professors are excellent physicists, and my interactions with them motivated me to want to be their colleagues one day,” he said. “But undoubtedly, Professor John Lupton, my Ph.D. advisor, made the strongest impact on me and, on a near-daily basis, demonstrated how fun and exciting research could be. Without experiencing John’s passion, excitement, creativity, and professionalism, I am not sure I would have continued on the academic track. Working with him was inspiring and very formative for my excitement for scientific research in academia.”

After Borys obtained his Ph.D., he continued working in the same lab under the direction of Lupton, who had just moved to the University of Regensburg and offered Borys a postdoc position in his group as the rest of the graduate students finished their degrees. Lupton gave him significant latitude to work independently and help colleagues finish their projects. “The autonomy and independence of this period were great experiences for me, and by working with John and his vibrant team of students and postdocs, I continued to develop a strong passion for academic-style research,” said Borys.

As things wound down at the U, he began looking at national labs for his next position and landed a non-permanent scientist position at the Molecular Foundry at Lawrence Berkeley National Lab. At the Molecular Foundry, he honed the skills he had developed at the U in optical spectroscopy of nanoscale systems and took the opportunity to learn several new experimental and fabrication techniques in the field of nano-optics. The experience deepened his love for academic-style research and gave him a great opportunity to develop a talent for mentoring younger colleagues and graduate students. After five years at the Molecular Foundry, he moved to MSU.

Value of U education 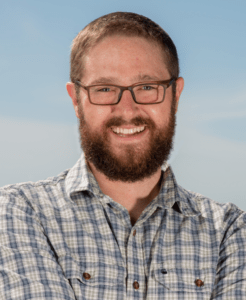 Borys says the U gave him countless opportunities to develop his passion for physics into a career. The vibrant community of professors, especially his advisor, demonstrated how fun and engaging high-end science can be. “It was not my intention to become a professor when I entered graduate school,” said Borys. “I just wanted a more interesting job. But after seeing the interactions among the professors in the Department of Physics & Astronomy at the U and the type of problems they were working on, I was hooked on the prospect of working in physics full-time at the professor level. They inspired me to pursue an academic career that allowed me to perform the same type of very creative and innovative research.”

Beyond his career, the friendships he developed with peers and colleagues during his graduate studies at the U are among his most cherished and valued relationships to this day.

“It is impossible that I did everything right, but I wouldn’t make major changes if I could do things over again,” he said. “All-in-all, I feel very fortunate to be a professor in a field that I love and in a geographic area that allows me access to my passion for the outdoors.”

If he could go back in time to his younger self, he would tell himself not to be afraid of changing directions in life and that hard work pays off. “Stay disciplined. Stay committed. Be sure to have fun. Enjoy the people with whom you work and all of their unique personalities and diverse backgrounds. Take a bit more time off for climbing trips and vacations with friends,” he said.

In his spare time, he gets outdoors as much as possible, especially enjoying rock climbing and skiing.