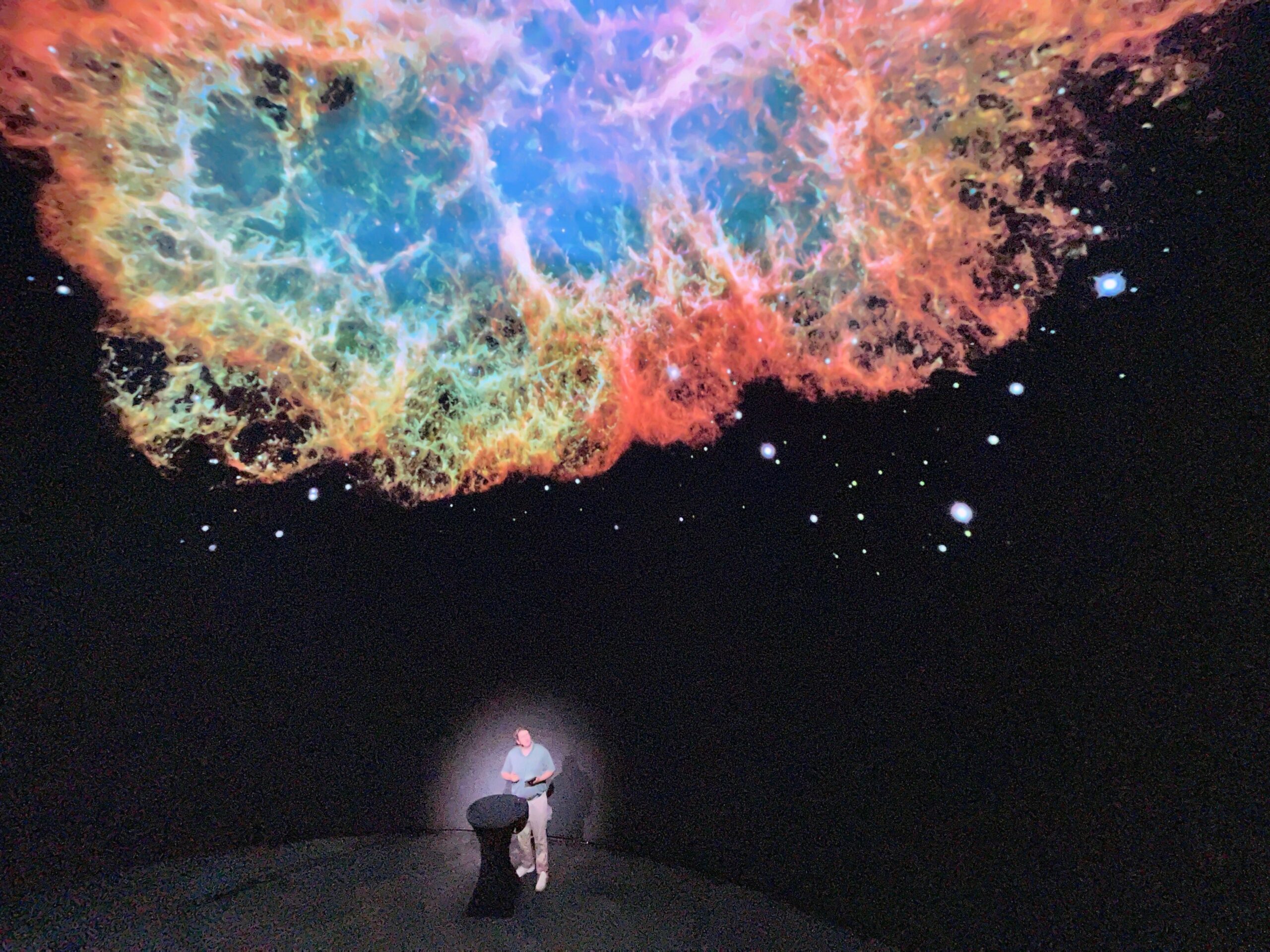 This past summer Keegan Benfield, Ethan Lamé, and Christian Norseth, in the U’s Department of Physics & Astronomy, participated in an internship program at Evans & Sutherland, a Cosm company.

The Physics Department had an opportunity to chat with the students about the internship.

How did you learn about the internship?

I learned about it through an email from my U of U physics advisor, Cyri Dixon, the day before the internship closed. The email introduced me to Cosm. I was excited and applied right away.

I first heard about the internship with Cosm from Cyri Dixon. It sounded interesting, so I thought I might as well apply.

My advisor, Dan Wik, told me about the internship during one of our meetings.

What problem were you trying to solve at Cosm/E&S?

Lamé
We were given the task of creating shows using their software, Digistar.  We each picked a topic to research, and then we used Digistar to program the show as if it were to be shown to a planetarium audience.

Norseth
My understanding is that Cosm/E&S put a lot of effort into adding accurate astronomical data and surveys into their planetarium software, and they wanted a way to show planetariums how to use the data.

The astrophysics interns were assigned two projects: designing two presentations on astrological objects and compiling a research paper that complemented the productions. The goal was to demonstrate the Digistar 7 system capabilities.

“It was a very rewarding experience overall. It was nice to have freedom in the job to work creatively and make something of my own. Being able to use their technology and present to an audience in their fancy venue was especially cool.”
Christian Norseth

How did you go about developing a solution?

Norseth
I selected two topics and researched them. I chose Extrasolar Systems and Stellar Formation Regions. We had a general outline of what kind of information we should include in our 5-10-minute planetarium show. I compiled a lot of information and then wrote out a “storyboard” with each element I wanted to include. I then designed the show in Digistar by writing automated scripts in the Digistar Command Language that controlled where you were in space and other visual elements on the dome. We could test our shows out on a projector dome that you would have in a planetarium.

During the first week, we were instructed on how to use the Digistar 7 systems and were given a general tour of the company facilities, including their three domes. We learned the operations and usage of the medium dome so that we could test our presentations. We used the remaining nine weeks to research, develop code, and collaborate on the shows.

Did you collaborate while still working on your own projects?

We each worked on different topics throughout the internship, but we still helped each other. There are a lot of functionalities that the Digistar software has that we found through experimentation on our own topics, so if one of us had a question on how to do something, the others would often have an answer.

Each astrophysics intern selected their own two topics to investigate and research on their own time. However, we regularly met at the offices to discuss our code, receive help in coding, and peer review each presentation. We could easily rely upon each other when a problem occurred. Due to the variety of options that the Digistar 7 systems offered, each intern developed a unique method of generating various celestial objects so that each of our presentations were different.

We all worked on our own shows individually, but we helped each other figure things out. We would help each other with framing certain information or give suggestions on how to create an element in our shows.

“Working with a software that I’d never used before, Digistar 7, was challenging and exciting. Searching through the different commands and trying things out, just to eventually find exactly the thing I wanted was very rewarding.”
Ethan Lamé

Tell us about your daily routine.

My work day usually started around 9 a.m. and ended at 3 p.m. The day was broken up into sections depending on the number of meetings I had that day. For the days with fewer meetings, I spent my time in the computer lab or medium dome, developing my presentations and aiding or receiving coding aid from other interns. We also reviewed each other’s content in the dome. On days with multiple meetings, I spent my time preparing and conducting a little bit of coding. When I wasn’t at Cosm’s facilities, I was at the Marriott Library, conducting online research or scouring the library for research books.

Each intern was assigned a Cosm buddy—an older company member. I met bi-weekly with my buddy to discuss any problems and to review my and practice my presentations.

We did have internship week, where all of the interns traveled to the facilities here in Utah. We had multiple activities, ranging from an airplane competition, designing a Cosm event, and having dinner and a movie in the large dome. We also received tips about hiring and using LinkedIn as a networking tool.

Every week I’d come into the office on Monday, Wednesday, and Thursday and get to work in a shared computer space. If I needed to test any content on the dome, I’d export my scripts and head down to the bottom floor where I could use the projector dome.

Typically, I would arrive just before 9 a.m. and jump into working on whatever work I had from the previous day. There were occasionally meetings during the day that we were able to join from our laptops, but for the most part, we stayed in the computer lab, working on our shows. Most people were there most days, so I was rarely the only one in the room. Often, we would go to a planetarium projection dome in the office and play our shows to see how the movements/animations worked and fix any bugs that popped up. I would often be doing research on the internet while working on these projects to make sure that the information I had was correct and to search for more engaging stories to tell.

“I enjoyed my time at Cosm. I was initially nervous, given this was my first internship, but everybody was welcoming, and I got to know quite a few people.”
Keegan Benfield

Norseth
I’m hoping to attend graduate school in astrophysics. This is my second year applying, but I should have a published paper under my belt this time. After my Ph.D., I’m not sure what I’ll do, probably try to become a professor or conduct some kind of astronomy-related research.

Lamé
I’m planning to apply to some graduate school programs in astrophysics, and maybe even an engineering program or two. I’d love to dive deeper into a related field in grad school and once I know that I enjoy working with that skill set, eventually move into an industry job.

I love learning and developing skills that are desirable for my career path. I want to enter the field of defense contractors or work at a national lab. I also plan on continuing my education by earning a master’s or a Ph.D. in engineering, computer science, and physics. Eventually, I want to start my own company based on some inventions that I have semi-planned out.

According to Melinda, Orms, Product Manager at Cosm, the Astrophysics Internship program with the University of Utah, Department of Physics & Astronomy, began after Dr. Anil Seth, Associate Professor, reached out to Cosm in the spring of 2022. Cosm invited Seth and his colleagues to visit the company’s Experience Center. During the visit, faculty had a tour of the system and its capabilities. Cosm talked about its desire to collaborate and the idea to have interns from the U Astrophysics program first surfaced.

“Our summer internship registration period had just ended here at Cosm, said Orms. “However, Karen Klamczynski, our training director, and I wrote up a plan for the Astrophysics Internship program, and we were able to get special approval to move forward at a very late date. Because a significant amount of training was involved, we required four interns in order to launch the program. We sent the information to Daniel Wik, Assistant Professor in the U’s Astrophysics program. We gave him a deadline of a few days to secure candidates for the program. I don’t know how, but he did it, but we ended up with six applicants and filled our four positions.”

The company-wide internship had 13 participants, located in Salt Lake City, Los Angeles, and New York. They filled positions in many areas of the company, including technical writing, business development, design, and sales, etc.

Digistar is the world’s most advanced planetarium system, and Cosm’s customers teach science and astronomy in facilities all around the world. The company wanted to make it easier for their customers to present topics that utilize the wealth of astronomical data that is pulled into Digistar.

“We had Ethan, Christian, and Keegan take an abbreviated training course to learn how to use our system,” said Orms. “They selected and researched topics. For each topic, they created Digistar visualizations (5-10-minute shows) and supporting information and materials. Their projects were shown to our customers from all around the world. What they created will be made available to our customers for use in their planetariums. We finished the internship with an evening in the dome where they presented their lessons to friends and family and some of their professors.”

Cosm plans to continue and, hopefully, expand, its Astrophysics Internship program with the U’s Department of Physics & Astronomy. The company is looking forward to selecting more interns in January and are discussing plans for hosting a lecture in the dome.