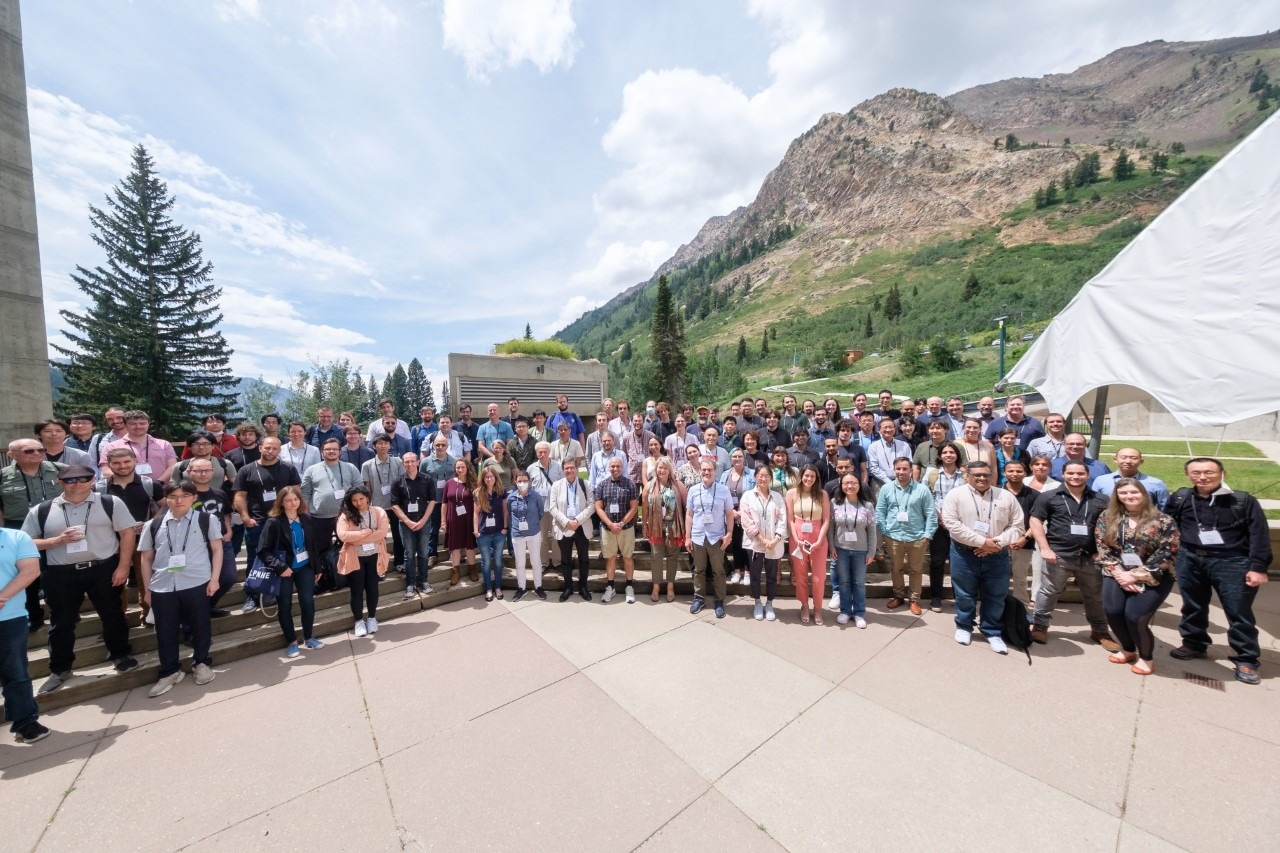 This article originally appeared in the CERNCourier

Neutrinos are the least understood of all elementary particles, and the fact that they have mass is a firm indication of physics beyond the Standard Model. Decades of effort have been devoted to exploring the properties of neutrinos. However, there are still many important questions to address. For example, little is known about the absolute mass scale and neutrino-mass ordering. Also, we have not achieved a decent measurement of the CP phase in the neutrino mixing “PMNS” matrix. Furthermore, the nature of neutrino masses, i.e. whether they are Dirac or Majorana, remains unknown.

From 30 July to 6 August the 23rd NuFACT workshop hosted by the University of Utah reviewed recent developments in neutrino physics, particle physics and astroparticle physics. The workshop brought together experts from all leading neutrino experiments and discussed theoretical aspects, with the aim of facilitating new connections between different disciplines and theorists and experimentalists.

Three mini-workshops took place. One explored plans for the second phase of the European Spallation Source neutrino Super Beam (ESSνSB) project, for which the European Union has recently decided to continue its support for another four years. This second phase will study new components that open additional physics opportunities including muon studies, precise neutrino cross-section measurements and sterile-neutrino searches.

The two-day mini-workshop “Multi- messenger Tomography of the Earth”, involving 22 talks, saw leading neutrino physicists and geoscientists exchange ideas on how Earth’s interior models may impact high-precision measurements of neutrino oscillation parameters. Participants also addressed the potential of using neutrino absorption at high energies (PeV–TeV) and neutrino oscillation at low energies (~GeV) inside Earth to locate the core–mantle boundary, determine the density of the core and mantle, and measure the chemical composition of the core. A third workshop targeted career development, with the aim of improving communication and negotiation skills among early-career scientists.

Progress in using neutrino-oscillation measurements to search for hints of new physics and symmetries in nature was discussed extensively. Central questions to be addressed include: is the neutrino-mixing angle θ23 exactly 45°, which might hint at a new symmetry in nature? Is the PMNS matrix unitary or could it indicate there are additional neutrinos or something fundamentally wrong with our understanding of the neutrino sector? Are there more than the three active neutrinos? Do we see indications for CP violation in the neutrino sector or is it even maximal? Do neutrino-mass eigenstates follow the same “normal” ordering as observed for quarks, for which there is currently a slight preference in the global fit data ?

The latest results from leading experiments including IceCube, KM3NeT/ORCA, NOvA,Super-K and T2K were presented. T2K presented a new analysis using the same data runs as last year, but using more data from the near and far detector samples combined with upgraded cross-section and flux models. T2K and NOvA data preferences on δCP and sin2θ23 are broadly compatible and joint fit results can be expected for late 2022. For the normal-mass ordering case, the most probable regions are distinct, and the significant contour overlap of 1σ, while no preference on CP violation can be inferred. For the inverted mass ordering case, T2K and NOvA contours overlap and are consistent with maximal CP violation in the neutrino sector.

Particularly competitive results of neutrino oscillation-parameter measurements with neutrino telescopes are available from IceCube–DeepCore and ORCA, and are now approaching the precision of accelerator-based neutrino experiments.

Various theoretical aspects of neutrino physics were covered. The nature of the neutrino mass, either Dirac or Majorana, remains a key focus. Different see-saw mechanism types and their experimental consequences were intensively discussed. In particular, recent progress in Majorana neutrino tests using both neutrinoless double-beta decay experiments as well as LHC measurements by the new FASER experiment were reported. Connecting neutrino and muon experiments, such as charged-lepton-flavour violation and the application of a possible muon collider to neutrino physics, were extensively addressed. The existence of sterile neutrinos and their properties remain of high importance to the field and future experimental results are highly anticipated, such as the short-baseline program at Fermilab and JSNS2 at J-PARC. Alternative explanations for various neutrino anomalies were also discussed, including more general dark sector searches using neutrino experiments. The electron low-energy excess at MicroBooNE in particular draws attention. The focus is on improved event reconstructions, which may unveil the nature of this anomalous excess. Assuming the existence of one species of sterile neutrino, 3+1 oscillation analyses have been carried out to interpret the anomaly and compare with results from other experiments. Although inconclusive, this anomaly triggers many interesting ideas that will motivate follow-up studies.

Taking place shortly after the Snowmass Summer Meeting in Seattle (see Charting the future of US particle physics), NuFACT2022 also offered an opportunity to summarise the scientific vision for the future of neutrino physics in the US. The neutrino frontier in Snowmass has 10 topical groups, with physics beyond the Standard Model and neutrinos as messengers emerging as major focuses. Many possible synergies between neutrino physics and other branches of physics were also highlighted.