Emeritus Professor William David Ohlsen died peacefully at his home in Salt Lake City on August 9, 2021, following a diagnosis of pancreatic cancer. He joined the University of Utah faculty in 1961, where he spent 36 years teaching physics and mentoring graduate students. We will miss him.

His research at the U involved the study of defects and dopants in crystalline and amorphous semiconducting solids. Amorphous silicon, crystalline III-V semiconductors, and chalcogenides were the subjects of other investigations.

Bill was born June 8, 1932 in Evanston, Illinois, to Wilma and Edward Ohlsen and grew up in Ames, Iowa.

Bill was introduced to the love of his life, Ruth Bradford, in 1955 by Ruth's sister Nancy. Following months of exchanging letters and phone calls, they met for the first time in person on January 1, 1956. They spent a total of four days in each other's presence before marrying on June 16, 1956 in a double wedding ceremony with Nancy and John Clark, Bill's boyhood neighbor and lifelong friend.

Bill was an enthusiastic traveler, visiting twenty-two countries over the course of his life, including two sabbatical trips to Germany. An avid lover of the outdoors, Bill enjoyed skiing, hiking, biking, fishing, hunting, camping, backpacking, and running. At home, he enjoyed classical music, a good book, a good basketball game, and a good beer. He also loved puzzles and games, including chess, sudoku, and the Wall Street Journal Saturday crossword. 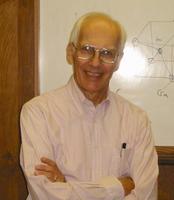 Bill cared deeply about the environment and lived his principles. For example, he walked or rode his bike to work every day of his life, composted, recycled, participated in highway trash collections, and chose to avoid air travel to the extent possible. Bill will be remembered by all who knew him for his humility, generosity, wisdom, and kindness.

In lieu of flowers, donations can be made to Save Our Canyons. Visit http://saveourcanyons.org for more information.

From The Salt Lake Tribune.